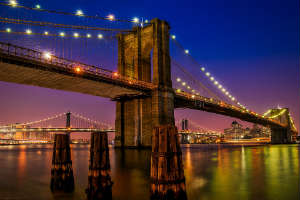 There are over 616,000 bridges and of those, over 47,000 of them are in need of repairs. This is according to the group’s findings. The group’s main goal is to push for investment into transportation infrastructure throughout the country.

And, what’s scary about the situation? Americans are still using these bridges. In fact, we cross over these structurally deficient bridges at least 178 million times per day.

In addition, many of these bridges are considered national landmarks. These include everything from the Memorial Bridge, the Brooklyn Bridge, and even the Robert S. Maestri Bridge.

But, the bridges that are the most traveled ones with deficiencies are in different areas of California. These are along Route 101, Interstate 405, and Interstate 5. Drivers cross these bridges about 289,000 times per day.

Interestingly, the state of Iowa has the largest number of bridges that need fixing. In fact, the number is already over 4,500 in deficient bridges. So, how do we fix this problem? And what will happen if the problems with these bridges are not addressed?

The report states: “While these bridges may not be imminently unsafe, they are in need of attention. Nearly 69,000 bridges across the country are ‘posted for load’, which means there are weight restrictions or other measures in place to reduce stress on the structure.”

What do you think about the issue with the bridges in the US? How can we address the problem before it becomes bigger?

Buick Envision for 2022 is a Price Bargain for the Consumer