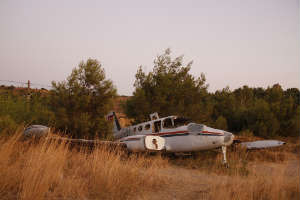 FORT Worth, TX – According to authorities, a very small airplane crashed near Fort Worth’s Gateway Ball Park on Sunday afternoon. Luckily, the crash occurred in a remote area of Fort Worth. Unfortunately, the crash injured the couple within the plane.

Police discovered the single-engine Beechcraft Bonanza near the Trinity River. When the plane was discovered it was in a very remote area. The Federal Aviation Administration officially (FAA) reported the location of the plane on Sunday evening.

Sadly, there was a couple aboard the plane when it crashed. The pair consisted of a man and a woman in their fifties. The man, who is not currently identified, was piloting the plane. His injuries were not detrimental to his health and he was walking around when the emergency crew arrived. On the other hand, the woman’s injuries were a lot more serious. Medstar claims that both parties were conscious when found.

Apparently, the pilot had lost engine power before the plane went down. He reported it to an FAA member, and spokeswoman Lynn Lunsford confirmed this.

The trips official destination is not known yet. But, the couple was leaving the Meacham Airport when the crash occurred. Suspiciously, the plane is registered in Tennessee, and the pilot certificate updated earlier this month was listed with an Arlington address.

The police are currently attempting to further investigate the accident. The woman’s recovery is in question. Hopefully, the injuries are non-fatal.

Crystal Mason has a Legal Team Seeking Review of Her Case