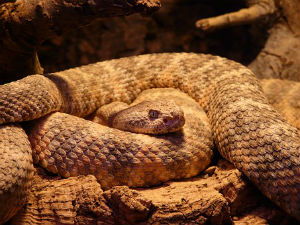 FORT WORTH, TX – A homeowner two hours west of Fort Worth was experiencing some TV reception issues. Consequently, he went crawling around under his house to see if he could get to the bottom of the issue. Maybe the high winds had dislodged something.

Turns out it wasn’t the winds, instead the man noticed a “few” snakes. He immediately called Big Country Snake Removal to deal with the issue. He wasn’t going to have snakes living under his home, which is located between Albany and Baird.

Once Big Country Snake Removal arrived and started to look at the issue, they found more than the reported “few snakes.” In fact, after it was all said and done, they had removed a total of 45 snakes from the house. That’s definitely enough slithering around to mess with the TV reception.

Typically, when the weather warms up those snakes will come out from under spots like that of the house.

According to the Centers for Disease Control and Prevention, there about 7,000 to 8,000 venomous snake bites a year in the U.S. On average, about five of those end up being fatal.

As a matter of fact, already this year Texas Health Resources has recorded six venomous snake bites. Additionally, this Texas health system has seen one non-venomous bite. This occurred in Denton.

Erik Ledig, medical director of the emergency department at Texas Health Willow Park and Texas Health Burleson, made a point to note that snake bites in the U.S. are generally not fatal.

Also, according to an official at Big Country Snake Removal, snakes are indifferent to the type of house you have, they are just looking to survive. Well, they won’t be surviving under this particular Texas house anymore.